No-1 Online Portal of Bihar
Online Bihar
Newse
Comments
Uttarakhand Weather Update: The nights have become colder in the plains of Uttarakhand than in the mountains. Compared to Mukteshwar, Mussoorie, Lansdowne, Tehri, the plains of Doon, Pantnagar, Bajpur etc. are colder at night. According to the Meteorological Department, Mussoorie recorded a minimum temperature of 9.4, Mukteshwar recorded 6.7 on Thursday.

It was 7.5 in Lansdowne, 7.4 in Tehri, 7.0 degree Celsius in Kausani. In comparison, the minimum temperature of Doon was recorded 4.9, Pantnagar 3.1, Bajpur 3.0 degree Celsius. The minimum temperature in the plains is running two to three degrees Celsius less than normal. According to the forecast of Meteorological Center Dehradun, there will be shallow fog in Udham Singh Nagar till December 18.

The weather will remain clear in the rest of the state. The Meteorological Department has issued a yellow alert regarding the severe cold in the plains during the night. 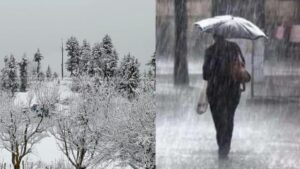